Our September article GlampLyfe’s 5 Favorite Campfire Recipes featured seasonally Summer foods. Read it to learn easy recipes with peaches and summer squash. As the weather has changed and it’s officially January, it’s time for a new iteration of this list. In my family, wintery mix calls for warm hearty meals and lots of crunchy bread. Camping in the cold with limited resources? You’re probably sticking to one-pot meals like stews, curries, and soups.

“Packed with plant-based protein, completely filling, and loaded with flavor, these curried chickpeas with coconut milk continues to be a recurring camping favorite.” Coconut milk means this Fresh off the Grid recipe is vegan! Spicy savory curry sounds like the perfect pick to warm you up in winter months. This one happens to look delicious. The recipe suggests pouring over rice but you could also roast some pita or naan bread to dip.

As someone with Greek grandparents, halloumi is a staple for birthdays, holidays, and other events in my life. It’s an awesome addition to a campfire cookout because it’s warm and you can eat it with your hands. This recipe card from Healthy Recipes couldn’t be more simple. If you want to save it for dessert, drizzle some honey on top of the dish.

Good ol’ fashioned pasta is a campfire staple. You probably don’t need inspiration to cook noodles with red sauce. Look what happens when we elevate it with steak, mushrooms, and creamy sauce. Fresh off the Grid’s recipe explains how to whip up this filling one-pot meal. You could add some spinach to make this a little healthier. Spinach should cook down to be small enough that you won’t have to worry about the single pot overflowing.

In the mood for glamping? If granola bars aren’t your thing, you may be interested in more sophisticated recipes. Martha Stewart has a great selection for outdoor cooking, including this warm dessert option. If you want to try this out but don’t want to bring all of the ingredients, you can probably leave out the ground cinnamon and stick to one kind of berry.

This three-ingredient cocktail is straight to the point. If you already brought coffee, you’re golden. You’re guaranteed to warm your bones in cold weather with a stiff whiskey drink. Make it vegan by adding almond or oat milk instead of cream. Oats has other awesome whiskey-based recipes that incorporate nature more heavily by including forested berries and the like. 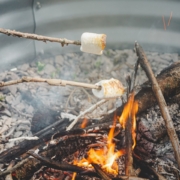 On our social media (@glamplyfe everywhere), you’ll see we emphasize photography. We’ve found that featuring photos of our Ohio campsite online draws in a lot of new guests who live outside of the area. While “word of mouth” and good reviews are important, photography and videography convinces the aesthetically inclined. We’re always looking for new pictures from past visits to GlampLyfe! We especially want to see your pets and loved ones. In order to get the best photos, we’ve compiled a list of some of the top nature photography tips from Masterclass (which also includes gear suggestions) and American Forest.